Since summer 2016 the Power of Goodness project has expanded into Ingushetia and Dagestan. In August and September, trainings for trainers from these republics were conducted by trainers from the Chechen project in Grozny. From September, the Ingush and Dagestani trainers began conducting seminars in schools for teachers in their republics, supported by their Chechen colleagues. The trainings in schools, as in Chechnya, focus on using the Power of Goodness Stories of Nonviolence and Reconciliation and accompanying training resources to increase awareness of how to resolve conflict and build tolerance, trust, cooperation and empowerment in the lives and communities of the teachers and students involved. 257 trainings were conducted in all three republics from July to December 2016, attended by 655 teachers in total. 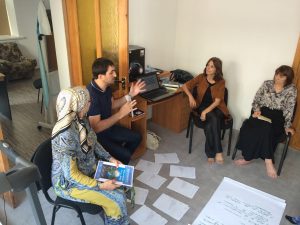 From June 2016 to February 2017 project trainers began the first of a series of round tables on countering radicalization and extremism among young people, in cooperation with local authorities, schools, religious leaders and young people. So far round tables have been conducted in the villages of Alkhazurovo and Goyskoye in Chechnya and in Makhachkala (Dagestan), led by project trainer-psychologists and the project coordinator. These meetings were attended by local imams, heads of the councils of elders, school directors and teachers, heads and other staff of local authorities and members of the public, including young people. All present agreed that the question of how to deal with challenges of radicalization and extremism is an urgent one. Themes discussed included how to protect teenagers from extremism and radicalism; how to counter extremism and terrorism through a deeper understanding of these phenomena, education and practical employment of traditional spiritual values as a way to counter extremism, and the challenges of youth unemployment. 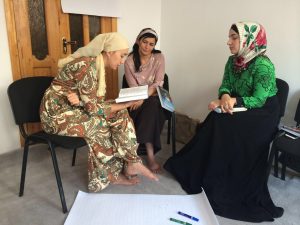 All present agreed that the community needs to come together and coordinate more closely in order to better understand and influence the reasons and pressures that are causing some young people to become radicalized and turn to extremist groups. It was agreed that these meetings were important first steps, and that further and continuous follow-up is required. Plans for additional activities were also agreed. Peacebuilding UK and our North Caucasus partners’ role is recognized as being important as a mediator and facilitator between local authorities and the community on this issue, to help increase trust and coordination to enable effective common approaches.